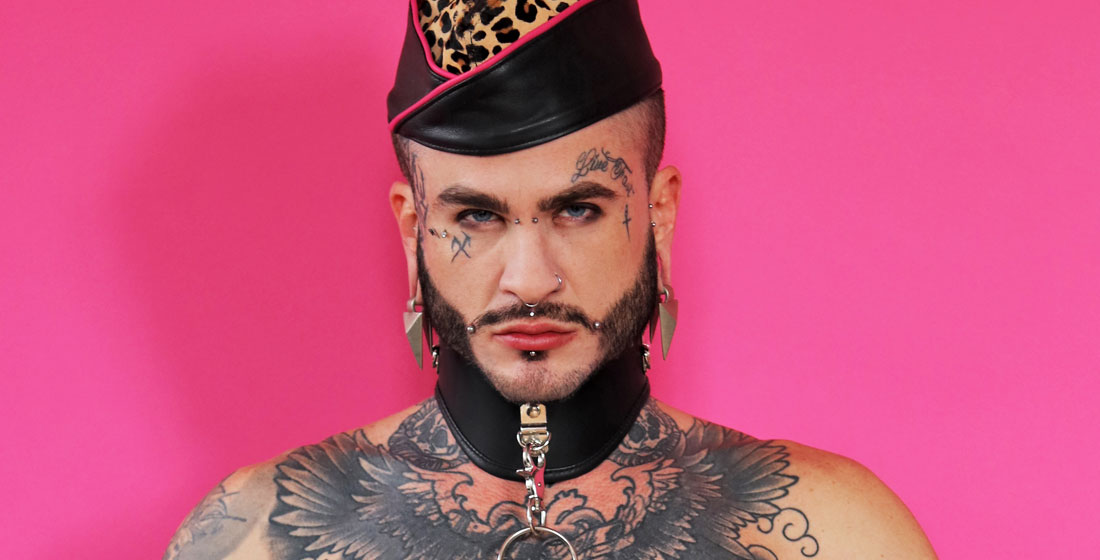 (New York, NY) March 4, 2020 – Celebrating its 40th Anniversary Season, Rites XLI: The Black Party® will take place on September 26 in New York City at the New York Expo Center. Produced by The Saint at Large® organization, The Black Party® is considered the father of all large gay circuit events and remains unchallenged as the forbearer in an ever-changing NYC nightlife environment. It’s an unapologetically, sexually-propelled LGBTQ phenomenon with a religiously devoted following.

This year’s theme is “Punk Riot: Dancing to Freedom,” a defiant expression of individuality, sexuality, and freedom from oppression by the powers that be.

In the initial poster art (above), a punk in a pink mohawk faces the Berlin Wall—before its fall. For Black Party 2020, the guests entering the New York Expo Center will be transported into the bowels of an abandoned theater converted into a punk nightclub. Retro in look, contemporary in emotion, Black Party 2020 promises to be an electrifying immersive experience, a night of punk pageantry, arresting artwork by respected New York City painters Scooter LaForge and Brian Kenny, and, of course, the party’s eagerly anticipated, shocking, and infamous “Strange Live Acts.” 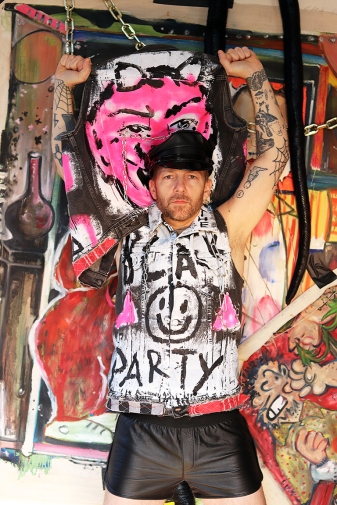 Scooter LaForge by Slava Mogutin for The Saint At Large

Brian Kenny by Slava Mogutin for The Saint At Large

Filmmaker and gay historian Leo Herrera returns to Black Party to once again ignite the night with his arsenal of trippy projected visuals and video artwork. Hererra is the producer of “The Fathers Project (Imagine a world where AIDS never happened and our heroes lived. Who would they be? Who would we be?).

New York-based Russian artist and author, Slava Mogutin has shot a series of photographs, featuring models in “Punk Riot”-themed gear and hand-painted items by Scooter LaForge available at www.thesaintshop.com, which will appear in a very special digital and print Black Party zine. 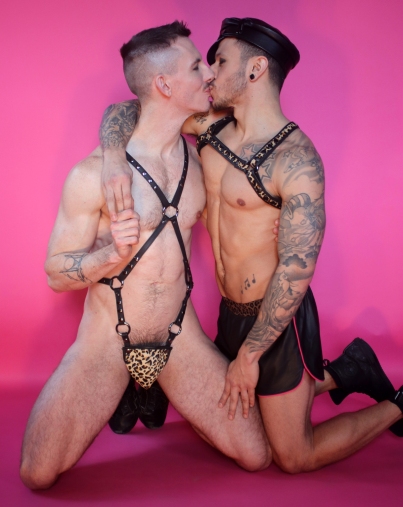 Proceeds from The Black Party® benefit The Saint Foundation in support of its mission to acquire and preserve artifacts of New York City LGBT nightlife of the post-Stonewall era in order to create a chronicle of the socio-economic, political and cultural history of the New York LGBT community.

About The Black Party®

Held this year on September 26, The Black Party®’s annual Rites of Spring celebration has firmly established itself as gay New York’s biggest, most intense nightlife event of the year. After 40 legendary years, it remains reliably and utterly unique; a mysterious, and highly anticipated one-night only, no-holds barred, nocturnal carnival.

Jetting in from over three continents, the loyal tribe numbers over 3500. All arrive eager to shed their winter skins, inhibitions and everyday personas. The order of the night: gear up, dance and revel in this carefully constructed alternate universe of fetish, fantasy and fun that is The Black Party®.

The Black Party is structured like a five act opera with a backstory, a director, featured actors, professional theatrical production and lighting design, and state-of-the-art sound system. To enter the world of The Black Party® is to enter into an immersive experience, a transporting vortex of rhythm and light, ignited throughout the night by the party’s infamous Strange Live Acts and delightfully subversive multimedia installations

The Black Party® is produced by The Saint At Large® organization. Inspired by the its legendary namesake nightclub, The Saint (1980 – 1988), Saint At Large® has built a reputation as the preeminent gay producer of nightlife entertainment, known and respected worldwide for its ambitious productions, cutting edge innovations and spectacular staging.

The New York Expo Center  boasts an amazing 10-acre venue space located directly on the East River Waterfront. Featuring 90,000 square feet interior space with a 60,000 square foot main event space. It is the largest no-closing-time-required permanent space in the five boroughs. The New York Expo Center is a favorite concert venue for international superstar DJs and as such, for The Black Party®, the space will be installed with the most advanced sound and light system in the world. https://www.newyorkexpocenter.com

Please visit www.saintatlarge.com for tickets, info and a comprehensive list of FAQs.

*Serious fetish clothing (leather, rubber, harnesses, gear), in the case of The Black Party®, often custom designed or customized by guests to reflect the party’s theme.

**NOTE: No press, cameras, phones or media will be admitted to The Black Party®. Attendees are asked to respect each other’s privacy and freedom of expression. Phones and cameras must be checked at the door. This is mandatory. Security will confiscate the mobile device of any patron violating the no cellphone policy. Busted patrons can claim their phones at the end of the event after deleting all images from their phone, cloud, etc. Those who disrespect this rule will be blacklisted from all future Saint At Large® events.

Great little sign at Le Fournil @lefournilnyc an excellent new French bakery that opened on the site formerly occupied by Moishe's Bake Shop (scroll for my previous post about the Moishe's T-shirt I designed). The croissants are the best I've ever had, as is pretty much everything else. All looks and smells so good.
Always on the hunt for smart, unique, LGBTQ/queer and ally projects and clients. I can be a little choosey, but that's because I want us to be a good fit, but don't let that stop you from dropping me a line. Even if we don't ultimately work together, I'm always happy to talk, give some feedback or a little pro bono direction.
Another trip to @casamagazinesnyc for the brand new issue of The Gentelwoman @the_gentlewoman Forgive the spate of recent posts for @casamagazinesnyc (but if you know the shop, you can't blame me, really) and of Fantastic Man @manfantastic and The Gentlewoman.
Here is the handsom Ali at @casamagazinesnyc. I went over couple weeks ago to pick up the current Fantastic Man @manfantastic , The Gentlewoman @the_gentlewoman and and their hot mega-tote.
Great new book from my favorite museum in all of NYC, The Frick. I'm addicted to their YouTube series, "Cocktails With a Curator," so find this to be the perfect compliment to the show.
One of my favorite New Yorkers, Aleksandra (Ola) Abdelwahed, co-owner, with husband Fawzy of my favorite neighborhood restaurant, B&H Dairy @bandhdairy Here she is in a still from a great video about the restaurant.
Loading Comments...
Comment
×
%d bloggers like this: