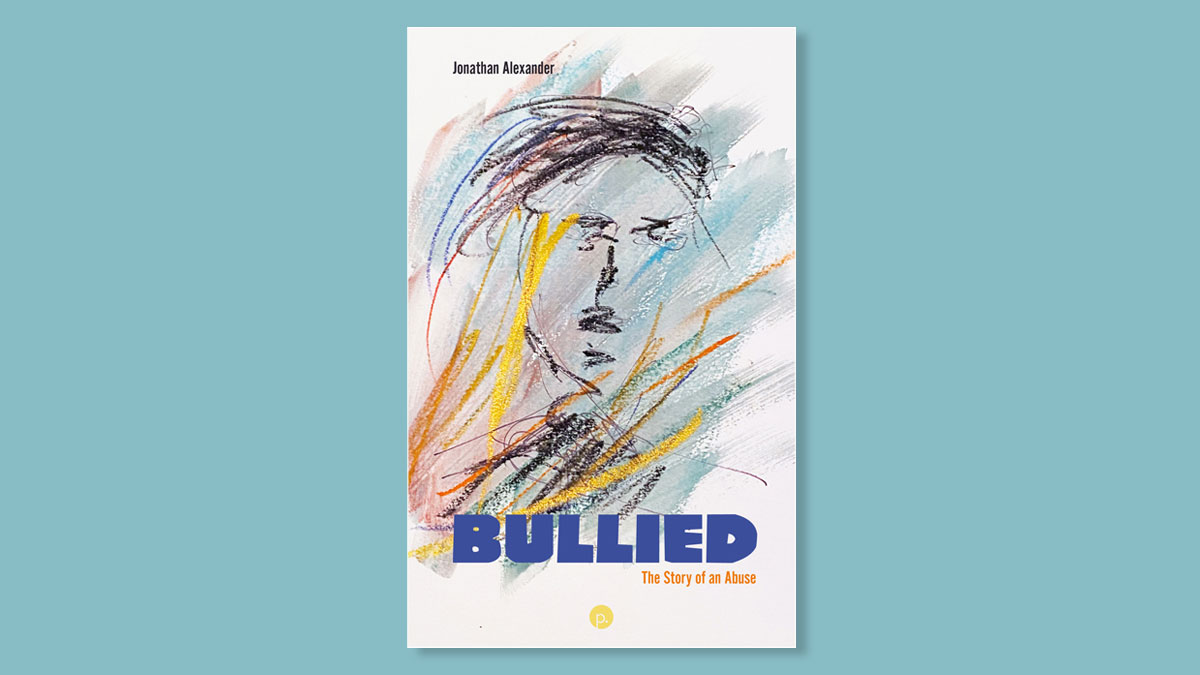 “Bullied: The Story of an Abuse” by Jonathan Alexander
Title Information

While Jonathan Alexander’s books are available at the major online retailers, we strongly urge readers to support their favorite queer and independent bookstores, such as the Bureau of General Serviced–Queer Division in New York and Skylight Books in Los Angeles, both of which are supporting Jonathan with online events in November. Check “56 LGBTQ-Owned Bookstores You Can Be Proud to Support” (organized by state) from Oprah Daily to find a queer book shop near you.

“Bullied” probes the legacies of homophobic violence experienced by the author growing up in the Deep South of the 1980s and looks at how the pressure of being queer inescapably and fundamentally shapes our lives and the stories we tell ourselves to make our queerness bearable.

Alexander reflects on a host of other oddly but intimately related topics, from drug abuse, sadomasochism, Catholic priests, and cruising to MAGA-capped boys and why Jussie Smollett may have staged his own homophobic attack. (“I don’t condone it. But I get it.”)

We are our experiences, even those we imagined. But what happens when what you thought was the defining moment of your life–in Alexander’s case, sexual abuse by an uncle, which he blamed for his queerness–might be a figment of your imagination? How does one deal with the evaporation of a lie of one’s own making?

“Bullied” Comparisons
Maggie Nelson’s “The Argonauts” mixes theory and personal narrative, much like Alexander, to confront the complexities of living a queer life.  Hilton Als’ “White Girls”  offers a series of essays tackling the vexed racial and sexual subjectivists of its authors, comparable to the way in which Alexander grapples with the legacies of homophobic abuse and the temptation to tell untrue stories to exonerate himself from being queer.  And Wayne Koestenbaum’s “Humiliation,” much like Alexander’s Bullied, blends personal narrative and theoretical and philosophical insights to investigate what it means to adopt — and come to love, however perversely — a self that one was taught to hate.

Jonathan Alexander is a writer living in Southern California where he is Chancellor’s Professor of English at the University of California, Irvine. He is the author, co-author, or editor of twenty-one books. His cultural journalism has been widely published, especially in the Los Angeles Review of Books for which he is the Young Adult editor, where founding editor Tom Lutz called him one of “our finest essayists.” He lives with his husband and cat, and when not writing, dabbles in watercolors and plays piano in a music ensemble with friends.  For more about Jonathan Alexander and his books please visit the Jonathan Alexander page at http://www.popularpublicity.com, http://www.thecreeptrilogy.com and his website, http://www.the-blank-page.com.

Here’s a reality. I’m sitting with my mother and father, just days before I’m to be married. I’m 25. I have finished work on my PhD in comparative literature. Part of me is looking forward to starting my life, starting a life, a kind of life that I think I should have, that I think I should want. I’m sitting with my mother and father, talking about the upcoming ceremony, and I start crying, then sobbing. I’m sobbing. They want to know what’s wrong. It isn’t a question anymore, but a statement. They are not asking what’s wrong. They are saying something is wrong.

And I can identify what, actually, is wrong.

But my father beats me to the punch. My father, who otherwise took next to no interest in me, the man who likely didn’t even want me to be born, or who actually suspected that I might not be his own child because he didn’t want me that much, thinks he knows what’s wrong.

“I think I know what it is. You’re a homosexual.”

I’m writing this sitting in a coffeeshop, tapping away on my laptop, writing, writing, and looking up to check out the cute barista, the boy who doesn’t mind flirting a little bit, the college kid at the school down the road, today wearing cute little densely patterned socks sneaking out beneath the rolled ankle cuffs of his jeans. I’ve never seen him without his jaunty baseball cap. I wonder what his hair is like, his black hair.

My uncle had black hair.

I return to my father, the man who didn’t want me, offering me one of the truths of my life. You are a homosexual.

“Well, you’re close, I said. “I think I was molested by Uncle Glen, and it’s given me these thoughts, these feelings…I don’t know what to do.”

That was as close as I could get to the truth at the time.

My parents don’t seem that surprised. I was always a weird child, introverted, bookish. Bullied. A target. Called fag, faggot, gay, queer, homo — constantly, incessantly. How can so many people be wrong? I was otherwise good, a churchgoer, a good boy, a good boy. But quiet, shy, bookish, more comfortable with my books, my classical music, than other people, other boys, other men my own age.

I desperately did not want to be gay.

That became the organizing truth of my twenties, in south Louisiana, in the early ’90s. How do you deal with such a truth at such a time, in such a place? You find a backstory. In my case, I knew the backstory. I was convinced of it. I was molested by my uncle as a child, the only uncle I really knew, my mother’s brother, who had moved to New Orleans with her when they were just children. He was gay. He had a partner. We grew up knowing him and Michael, before he died of cancer when I was just a kid, 12 or so, as I was entering puberty myself, just on the verge of having my first thoughts, my first sexual thoughts, bad thoughts, about other boys. Right when the bullying became intense, severe, terrifying. Terror. Bullying is terror. Some kids protect themselves from their own thoughts by torturing others. Some other kids are the terrorized, the tortured.

Sitting with my mother and the father who didn’t want me, I talk about a night I barely remember, so many years ago, a night when Uncle Glen had taken me to see Fantasia. He loved classical music. He was a big man, burly, strong. He took me to this film. I was maybe six, or seven. Young. Maybe younger. My mother and my father start talking about how I had called them that night, wanting to be picked up, pick me up please, that I wanted to go home, but they didn’t come get me, they were having a night out, whatever, their own private time. I don’t re-member any of that, but I remember the film, bits and pieces of the film, something blue, but immediately, in that moment, sitting with my parents, sobbing, I’m wondering, why didn’t you get me, why didn’t you get me? He was molesting me. I was being molested.

I don’t know what my parents were thinking, except likely what I was thinking: that this explains so much. This explains everything. This is why I’m having the feelings about other boys that I’ve had, this is what people can read in my presence so clearly, this is why I am called out as a fag, faggot, gay, queer, homo. It’s not my fault. It’s not my fault. We are confident, even relieved. My sobbing calms us all. I can go through with this. I can go through with getting married. It’s all going to be ok.

I was confident I had been molested. I don’t remember being molested.