Thanks to “RuPaul’s Drag Race,” drag, the art of female impersonation, is huge. If you love drag and live in the Jackson area, you will want to attend Miss Gay Mississippi 2019, a preliminary competition to the nationwide Miss Gay America pageant, to be held at the Jackson’s premier LGBTQ nightclub, Wonderlust, on June 22.

June 22 marks the return of the Miss Gay Mississippi America pageant to Jackson, the first since 2014. 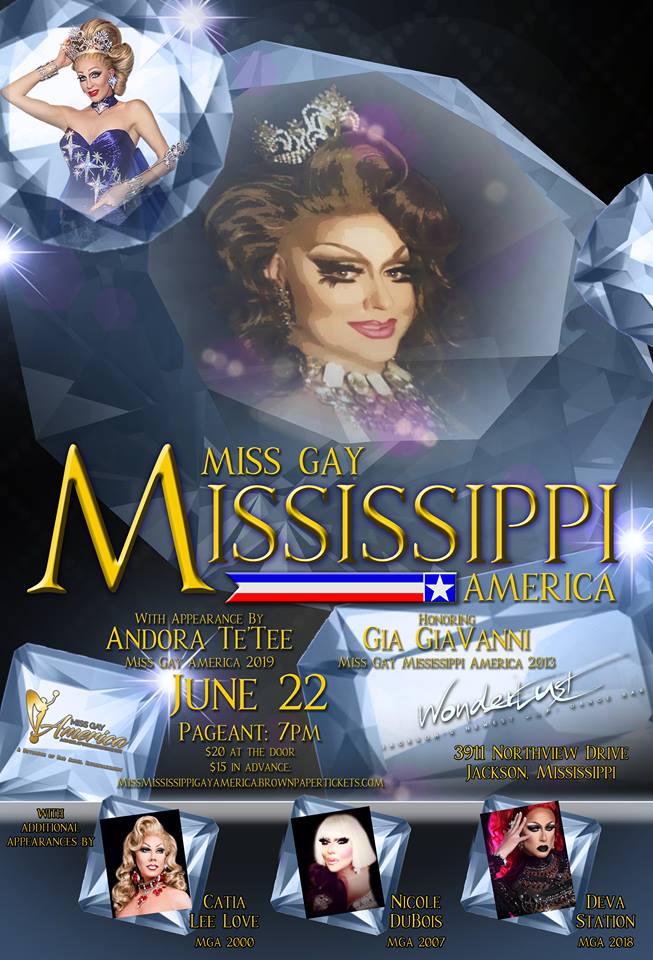 The pageant’s theme, chosen by Gia Giavanni (left), is, appropriately, “Return to Royalty,” to celebrate the first Miss Gay Mississippi America preliminary pageant in the state since 2014. While Presentation–when we get a first look at the contestants– is a non-judged category, those competing for the Miss Gay Mississippi crown are asked to wear a costume that reflects the “Return to Royalty” theme.

Contestants will compete in four judged categories: Male Interview (in suit and tie, which happens earlier in the day), Evening Gown, On Stage Interview and Talent (big production number with costumes, sets and dancers). The winner will go on to compete with nearly 50 other female impersonators from across the U.S. for the Miss Gay America 2020 crown this Fall in St. Louis.

Miss Gay Mississippi is a limited regional preliminary–meaning contestants must reside, for a minimum of 90 days, in a contiguous state (to the location of the regional contest). It is one of over one hundred city, state and regional preliminary currently happening across the country leading up to the national 48th annual Miss Gay America Pageant in St. Louis this October.