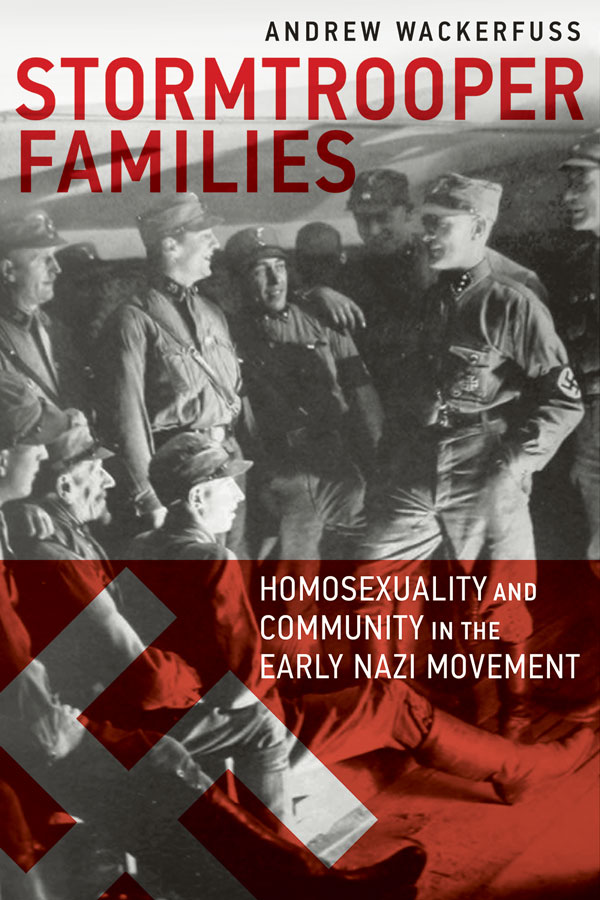 In the new book Stormtrooper Families (Homosexuality and Community in the Early Nazi Movement), ” just published by Harrington Park Press (New York, NY) and distributed by Columbia University Press, author Andrew Wackerfuss, PhD, quashes the myth of the “pink swastika” – the idea put forth by hysterically conservative pundits such as Scott Lively, Bryan Fischer, Pat Robertson and their ilk that “thuggish” homosexuals caused the rise of the Nazi Party, World War II, the Holocaust, and the general devastation of the world after 1945.

Stormtrooper Families, focused specifically on the men of the famously violent Nazi Sturmabteilung (aka “SA” or stormtroopers)**, reveals that life in the SA was far more bromance than romance. More homosocial than homosexual, the SA was a fiercely masculine network of social spaces in which stormroopers could live, eat, and sleep together in political and personal harmony.

Based on extensive archival work, Stormtrooper Families combines stormtrooper personnel records, Nazi Party autobiographies, published and unpublished memoirs, personal letters, court records, and police-surveillance records to paint a picture of the stormtrooper movement as an organic product of its local community, its web of interpersonal relationships, and its intensely emotional internal struggles.

Extensive analysis of Nazi-era media across the political spectrum shows how the public debate over homosexuality proved just as important to political outcomes as did the actual presence of homosexuals in fascist and antifascist politics.

Stormtrooper Families chronicles the stormtroopers’ personal, political, and sexual struggles to explain not only how individual gay men existed within the Nazi movement but also how the public meaning of homosexuality affected fascist and antifascist politics–a public controversy still alive today.

Andrew Wackerfuss is a historian with the United States Air Force and an adjunct professor at Georgetown University, Washington, D.C.

**The Sturmabteilung, SA or stormtroopers (Storm/Assault Division) was the paramilitary wing of the Nazis whose violent tactics became the face of the Nazi Party during its drive for power.

“A fascinating, well-researched and well-written book, this one is a keeper.” – Angel Curtis, OutSmart Magazine, Houston, TX, November 2015

“Andrew Wackerfuss and the editors at Harrington Park Press should be well commended for having published this compelling and important book. While this is certainly not a light read for a casual reader, Stormtrooper Families should have broad appeal to all scholars of social history, and every public or university library should have it available on their shelves.” – C. Todd White, Out In Jersey, November 11, 2015

For academic reviews, go to Reviews on the book website.