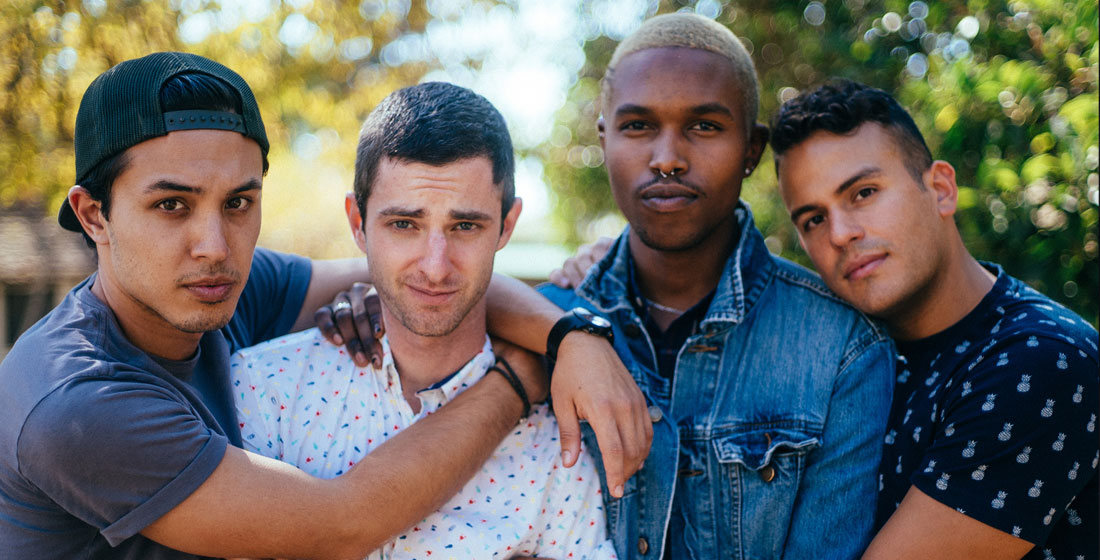 Set in West Hollywood, “I’m Fine” tells the story of Nate, who just broke up with his boyfriend – BUT IS TOTALLY FINE! – and in doing so takes a fresh, honest, and humorous look at gay male relationships and friendship, and the often-blurry line between the two.

“My motivation to make “I’m Fine” was the end of HBO’s ‘Looking,’ and how there is no series dedicated solely to how we as gay men experience friendships and relationships,” says Kirby. “Beyond what ‘Looking’ was able to achieve, I want to talk about gay male friendship in the way Noah Baumbach’s “Frances Ha” and the “Broad City” series have explored the fluidity found within female friendship.”

“I’m Fine” episodes 1 through 4 will be available on Dekkoo.com April 19, with episodes 5 through 8 launching June 21. It is Dekkoo’s third original series, following the critically acclaimed (really) dramatic series “Feral“, about gay life and love in the Bible Belt and “Love Is Blind“, which follows fourteen single New York City men on seven real blind dates (one per episode).

About the Director
Brandon Kirby is the creator, writer and director of Dekkoo original series “I’m Fine.” Currently the director of home entertainment sales and acquisitions at Strand Releasing, he began his career in L.A. five years ago at The Hollywood Reporter. When he’s not endlessly scrolling through Twitter (@bkkirby!) you’ll find him training on a bike for AIDS/LifeCycle and pulling together events for Outfest LGBT film festival. He’s also the co-creator of another series, “The Exorcists,” with his writing partner Jessie Katz; the project was a finalist in the 2016 Austin Film Festival digital scripted competition.

About Dekkoo
Dekkoo (pronounced “DECK-koo”) is the premiere subscription-based streaming service dedicated to gay men. It provides the largest streaming collection of gay-centric entertainment available boasting a larger selection than Netflix or Amazon Video. Dekkoo is available internationally via iTunes, Google Play, AppleTV and Roku, and in the U.S. via the Amazon Dekkoo Channel. Dekkoo original series include “Feral,” “Love is Blind” and “I’m Fine.” www.dekkoo.com •

Media only: For more aobut Dekkoo and Dekkoo shows, please visit the Dekkoo page on www.popularpublicity.com

The last 2 digital DJ promos from when I was the guest opening DJ for DJ Will Automagic at Susanne Bartch’s Vandam party. In the basement, of course, where the glamour was headsplitting. Kenny Kenny, Ladyfag, Desi Monster. Tap the bio link to check out the playlists.
Looking forward to an interesting 2020 for many reasons, not the least of which is that I have a new client, Paris-based footwear designer Louis D’Arienzo @louisdarienzo , for whom I am representing his eponymous line of gender-free shoes. They are not only spare, chic and beautiful, but made from materials that have low or no impact on the environment. More soon. 😎 if you get curious, no, they are not yet on his website. Anticipate!
From the cover of “LGBTQ-Inclusive Hospice And Palliative Care” by Kimberly D. Acquaviva and published by LGBTQ scholarly publisher, Harrington Park Press.  It is the first ever handbook for end-of-life care-givers, organizations and institutions caring for LGBTQ patients and their families. To say the least, this was a very personal project and well received by the media that matters. PR efforts not only inspired a great story that ran both on Kaiser Health News and the NBC website, but also a panel discussion at the Kaiser Health News headquarters in Washington, D.C. which I attended. Kimberly’s wife, Kathy Brandt, founder of the KB Group, a palliative care consulting firm in Washington were revered for their work in the field. Kathy was terminally ill at the time of the panel discussion and died about a month later. Harrington Park Press publisher Bill Cohen died suddenly in December of 2019. Through my own experience with palliative care during my mother’s death, I was able to get the book adopted into the training program of Hospice of Dayton, the nation’s first, largest and most influential hospice organization. If you are unfamiliar with the good work of Harrington Park Press, which is distributed by Columbia University press, please tap the bio link for more about the book and the publisher.
Project History: Rites XXXI: The Black Party® (The Forbidden Dance) 2010. At Roseland Ballroom, NYC. Photos by Klaus Enrique.
Project History: "The Box” book by Ron Amato. Gorgeous photo book by New York City fine art photographer and Professor in the Photography and Related Media department at the Fashion Institute of Technology. To see more of Ron’s work following him @ron_amato
Project History: Gay In America by Scott Pasfield I’d read about this book on Facebook, when photographer Scott Pasfield was seeking a publisher and expressed my interest in doing press for it. We met in Union Square, after which I walked him to a meeting with a potential publisher, Welcome Books (distributed at the time by Random House), which picked up the book. Scott got me hired freelance to do the press, after which Welcome hired me as their in-house VP Publicity. (Welcome closed a few years later and was sold to Rizolli.) 📸📸📸📸📸 From the press release: "In this first-ever photographic survey of gay men in America, stereotypes are laid to rest and an intimate, honest picture of contemporary gay life is revealed through stunning personal portraits and narratives. 📸📸📸📸📸 Photographer Scott Pasfield traveled 54,000 miles across all fifty states over a two-year span gathering stories and documenting the lives of 140 gay men from all walks of life. At turns joyful and somber, reflective and celebratory, each narrative and image is an enlightening look into the variety of gay life in the United States.” 📸📸📸📸📸 On the cover is Dan Choi, an American former infantry officer in the United States Army  who served in combat in the Iraq War during 2006–2007 an LGBT rights activist who publicly challenged America's Don't Ask, Don't Tell policy, which forbade lesbian, gay and bisexual (LGB) service members from serving openly.