13 Fascinating Movies That Celebrate The Richness of the Transgender Experience

(New York, NY) November 20, 2019 – Academic LGBTQ publisher Harrington Park Press has just made available a free and public database of over 180 films and television shows celebrating the diversity and richness of transgender lives. 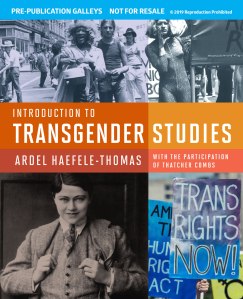 In “Introduction to Transgender Studies,” author Ardel Haefele-Thomas not only explores transgender lives in historical and political contexts, but shares dozens of intimate personal stories and essays from around the world, and celebrates the art, literature and cultural contributions transgender people.

The inclusion of the film and television lists was part of an overall effort to insure the book’s impact reaches far beyond “Transgender 101” and courses in LGBTQ, queer, and gender/feminist studies.

“I have often found that students experience a good deal of anxiety, trepidation, and confusion when studying issues pertaining to sex and gender, gender identity, gender expression, and sexual orientation,” said Haefele-Thomas. “I wrote this book to create a safe space for the full spectrum of undergraduate students, ranging from those who have never thought about gender issues to students who identify as transgender, trans, nonbinary, agender, and/or gender expansive. In short, the language and the artwork in this book are meant to be welcoming.”

13 Fascinating Films That Celebrate The Richness of the Transgender Experience

1 Southern Comfort
This teaches beautifully. And, it is one of the most perfect documentaries. The filmmaker is incredibly respectful of the community she is filming. And although the subject matter is heavy – a trans man dying of ovarian cancer because clinics refused to care for him because he was trans – the film itself is so full of love, simplicity (not in a bad way), and beauty.

2 Georgie Girl
Another documentary – this one about Georgina Beyer – the first trans member of Parliament in the world. As an out Maori trans woman, this documentary is wonderful to use for discussions of the continuing effects of colonization and for discussions on intersecting identities.

3 A Place in the Middle
A PBS short film that explores a middle school student who is Mahu. This is a perfect film for in-class and for discussion.

4 Leitis in Waiting
A wonderfully complex documentary that looks at trans people in Tonga. This film shows the effects of incoming evangelical missionaries who are calling for the eradication of the Leitis (trans women). A beautifully researched and filmed documentary.

5 Two Spirit People
This film is quite old now, but it still beautifully explains third gender identity (sometimes fourth and fifth gender identity) in Indigenous cultures of the Americas.

6 Mulan: Rise of a Warrior
The original title was Hua Mulan – such a beautiful film from China that is a meditation on war and on the legend of General Mulan. It is really interesting to compare this to the Disney version where the “gender reveal” is what is sensationalized. This Chinese film, though, is complex and rich as it looks at the fluidity of gender.

7 Still Black: A Portrait of Black Trans Men
Outstanding documentary that looks at intersecting identities and the stereotypes around Black masculinity.

8 Rocky Horror Picture Show
So, once this book was finally “put to bed” the first thing I wanted to watch was the scene with Tim Curry coming down the lift in those fishnet hose tapping his heel. Is the language outdated? YES! But this film continues to empower gender outlaws in their small towns where they cannot be out – but they can go to the midnight show and feel at home for a couple of hours. I still have students tell me this film changed their lives. It sure changed this trans and queer Okie’s life when I saw it in OKC in 1982!

9 Queen Christina
So, Hollywood tried (with the Hays Code) but they could not erase all of the gender slippage in this one! Greta Garbo. Dressed as a man. An amazing film.

10 Dream Girls and Shinjuku Boys
I am cheating and putting these two together. But they need to go together to see a fully rounded look at gender diversity in Japan. Both are stunning.

12 Major!
The iconic Miss Major Griffin-Gracy is featured in this fabulous documentary. The film honors our amazing trans elder – and all of her fight and strength and beauty come shining through in this film.

13 Screaming Queens: The Riot at Compton’s Cafeteria
Susan Stryker and Victor Silverman’s documentary about the 1966 San Francisco Riot that pre-dates Stonewall by three years is an outstanding look at the trans community in the Tenderloin neighborhood in San Francisco in the late 1960’s. The film beautifully studies the nuances of political difference and disagreement between Vanguard, a radical queer youth group, and many of the trans women in the Tenderloin who were trying to get through each day in the face of racism, transphobia, and police harassment. This film is also really inspirational in an academic context because it exemplifies the ways that a seemingly small find hidden in archive can lead to a major documentary film and the recovery of a nearly lost history. •

View “Introduction to Transgender Studies” on the Harrington Park Press website at www.harringtonparkpress.com/intro-to-trans-studies/

To request a copy of “Introduction to Transgender Studies,” or an excerpt, or to speak to author Ardel Haefele-Thomas, please contact Andy Reynolds at Popular Publicity, andy@popularpublicity.com. 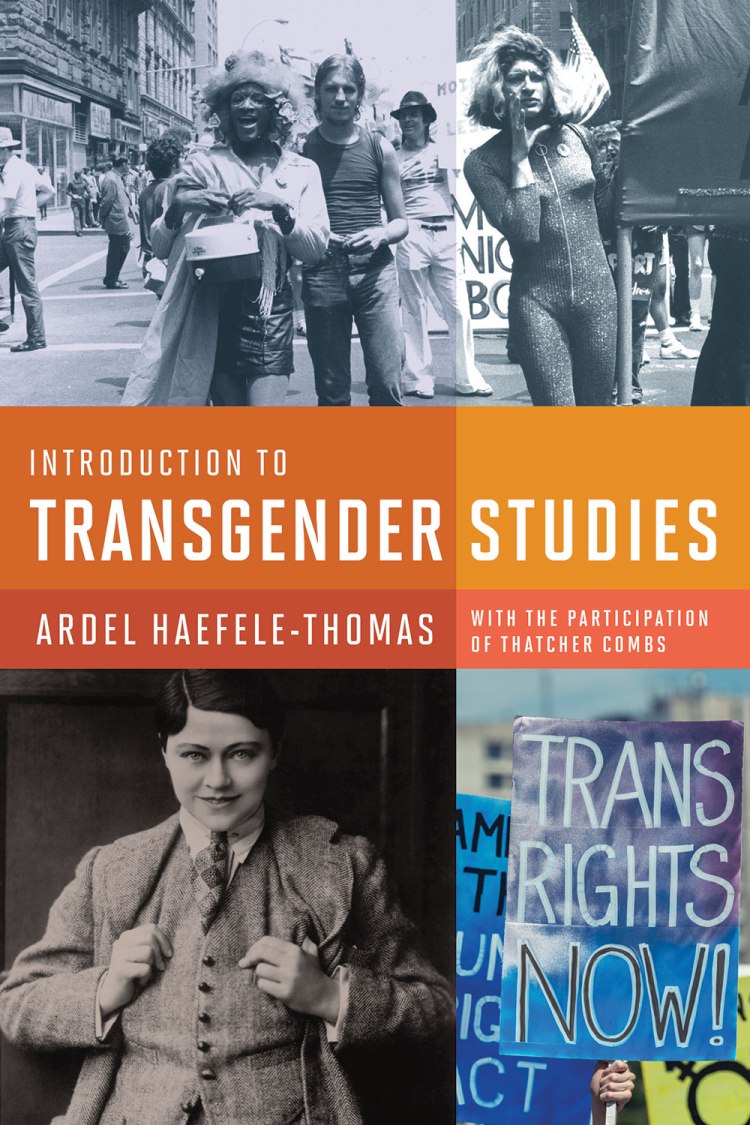 About the Author Popular Publicity

Andy Reynolds dba Popular Publicity is a New York City-based book, music, film, event and lifestyle publicist, as well as an expert in LGBT media worldwide, representing a rich spectrum of LGBTQ clients from scholarly publishers to The Black Party®.

The last 2 digital DJ promos from when I was the guest opening DJ for DJ Will Automagic at Susanne Bartch’s Vandam party. In the basement, of course, where the glamour was headsplitting. Kenny Kenny, Ladyfag, Desi Monster. Tap the bio link to check out the playlists.
Looking forward to an interesting 2020 for many reasons, not the least of which is that I have a new client, Paris-based footwear designer Louis D’Arienzo @louisdarienzo , for whom I am representing his eponymous line of gender-free shoes. They are not only spare, chic and beautiful, but made from materials that have low or no impact on the environment. More soon. 😎 if you get curious, no, they are not yet on his website. Anticipate!
From the cover of “LGBTQ-Inclusive Hospice And Palliative Care” by Kimberly D. Acquaviva and published by LGBTQ scholarly publisher, Harrington Park Press.  It is the first ever handbook for end-of-life care-givers, organizations and institutions caring for LGBTQ patients and their families. To say the least, this was a very personal project and well received by the media that matters. PR efforts not only inspired a great story that ran both on Kaiser Health News and the NBC website, but also a panel discussion at the Kaiser Health News headquarters in Washington, D.C. which I attended. Kimberly’s wife, Kathy Brandt, founder of the KB Group, a palliative care consulting firm in Washington were revered for their work in the field. Kathy was terminally ill at the time of the panel discussion and died about a month later. Harrington Park Press publisher Bill Cohen died suddenly in December of 2019. Through my own experience with palliative care during my mother’s death, I was able to get the book adopted into the training program of Hospice of Dayton, the nation’s first, largest and most influential hospice organization. If you are unfamiliar with the good work of Harrington Park Press, which is distributed by Columbia University press, please tap the bio link for more about the book and the publisher.
Project History: Rites XXXI: The Black Party® (The Forbidden Dance) 2010. At Roseland Ballroom, NYC. Photos by Klaus Enrique.
Project History: "The Box” book by Ron Amato. Gorgeous photo book by New York City fine art photographer and Professor in the Photography and Related Media department at the Fashion Institute of Technology. To see more of Ron’s work following him @ron_amato
Project History: Gay In America by Scott Pasfield I’d read about this book on Facebook, when photographer Scott Pasfield was seeking a publisher and expressed my interest in doing press for it. We met in Union Square, after which I walked him to a meeting with a potential publisher, Welcome Books (distributed at the time by Random House), which picked up the book. Scott got me hired freelance to do the press, after which Welcome hired me as their in-house VP Publicity. (Welcome closed a few years later and was sold to Rizolli.) 📸📸📸📸📸 From the press release: "In this first-ever photographic survey of gay men in America, stereotypes are laid to rest and an intimate, honest picture of contemporary gay life is revealed through stunning personal portraits and narratives. 📸📸📸📸📸 Photographer Scott Pasfield traveled 54,000 miles across all fifty states over a two-year span gathering stories and documenting the lives of 140 gay men from all walks of life. At turns joyful and somber, reflective and celebratory, each narrative and image is an enlightening look into the variety of gay life in the United States.” 📸📸📸📸📸 On the cover is Dan Choi, an American former infantry officer in the United States Army  who served in combat in the Iraq War during 2006–2007 an LGBT rights activist who publicly challenged America's Don't Ask, Don't Tell policy, which forbade lesbian, gay and bisexual (LGB) service members from serving openly.
%d bloggers like this: