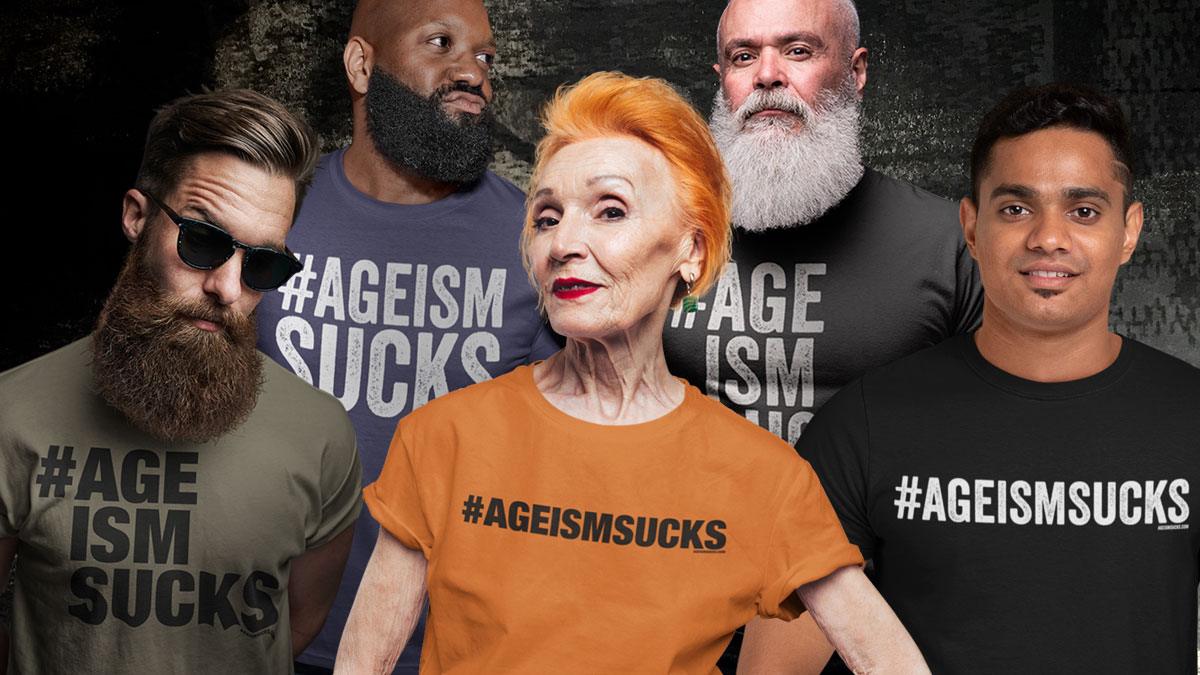 Battle Gear for the War on Ageism

Merchandise benefits SAGE (Advocacy & Services for LGBTQ+ Elders) and the ASA (American Society on Aging), the largest, most diverse community of professionals working in aging in America.

A new line of merchandise emblazoned with an all-caps #AGEISMSUCKS is dropping the refreshingly frank hashtag into the conversation about age discrimination championed by celebrities like Paulina Porizkova, Sarah Jessica-Parker and Madonna.

Liberated from the confines of social media, the attention-getting hashtag has hit the streets, eliciting thumbs-ups, positive comments and, yes, actual conversations about ageism with strangers of all ages.

“Great T-shirt! “I need one of those!” “Love the bag!” Reactions such as these are exactly the point of the #AGEISMSUCKS merchandise: to raise awareness of ageism, to convey the pain and frustration it inflicts, and to cue others to be mindful of their own attitudes towards people of different ages.

The creation of the #AGEISMSUCKS merchandise was spurred by a fiery Instagram post in which fashion veteran Sasha Charnin Morrison, 57, called out ageism in her industry and balked at the suggestion that she needed to “be more aggressive and hustle harder.”

“Well, fuck you. I’m exhausted. YOU hustle. YOU do it and while you’re at it–do it for me,” exclaimed Morrison in the post. “I wish I did have the energy, but not for acceptance from the groups that simply don’t get, honor or applaud age, and what we’ve done.”

Most adults accept the physical aspects of aging and find the accumulation of lived experiences to be life-enhancing, but it’s when confronted with ageism in the media, advertising, their careers, or on the street that they feel diminished and frankly, dismissed.

“It almost feels as if people don’t want us to be perfectly okay with where we are, as if they almost enjoy us being pained by who we are today,” actress Sarah Jessica Parker told CNN. “I know what I look like. I have no choice. What am I going to do about it? Stop aging? Disappear?” (More quotes below.)

It’s not ageing that sucks, it’s ageism. Besides being offensive and myopic, age bias is deeply harmful to its victims–ending careers, eclipsing quality healthcare, and negatively impacting mental and physical health.

Clocking ageism is good for everyone, including Gen Z adults, who can face equally dismissive age bias in the workplace, and karmically–because attitudes will take decades to change—even those currently perpetrating ageist behavior.

Join the ageism conversation or start your own–and let ageists know you’re onto them–by rocking an #AGEISMSUCKS T-shirt, hat, tote or mug available via www.ageismsucks.com or on Etsy at The Tee Service www.theteeservice.com.

10% of the proceeds from the sale of #AGEISMSUCKS merchandise benefit SAGE (Advocacy & Services for LGBTQ+ Elders) and the ASA (American Society on Aging), the largest, most diverse community of professionals working in aging in America.

Related: As seen in Out Magazine, “SAY GAY” T-shirt Colorfully Fights “Don’t Say Gay” Bills” 100% of the profits from the sale of “SAY GAY” merchandise benefit organizations fighting the “Don’t Say Gay” bill in Florida and similar bills in the works in at least 15 other states.

A few quotes on ageism below. Many more online here or at #AGEISMSUCKS on popularpublicity.com

“I believe that ageism is one of the last isms that’s acceptable. At this point, most of us are at least aware that racism, homophobia, transphobia, and misogyny aren’t publicly acceptable, but it is still kind of acceptable to make fun of older people. You see it in jokes, you see it in birthday cards, you see it in little everyday qualifiers like “you look great for your age.” – Steven Petrow, Author, “Stupid Things I Won’t Do When I Get Old,” to Katie Couric, “Author Steven Petrow’s Hilarious Advice on Embracing Aging“

“”You don’t get to dismiss me because I have some wrinkles and sags and gray hair now, when I’m kind of fabulous, the most fabulous I’ve ever been,” she adds. “In fact, I’m going to just put it out there and go, you know what, this is me at my best. Deal with it!” – Paulina Porizkova, “Paulina Porizkova Expresses Feelings on Ageism in the Modeling Industry: ‘You Don’t Get to Dismiss Me’,” People Magazine

’And finally, do not age,’ she added, twisting the knife. ‘Because to age is a sin. You will be criticized, you will be vilified, and you will definitely not be played on the radio.’” – Madonna, from her speech at the 2016 Billboard Women in Music Awards, “Madonna turns 60: The painful lessons she taught us about aging while female,” USA Today

“I’ve been reluctant to reveal my age on social media. I work in an industry where ageism is coded in its DNA and jobs become harder to find when those who do the hiring determine that you’ve circled the sun a few too many times. And so, I didn’t want my age out there. But here’s the truth: My age is my power. My age represents my experience.” – Rich Burns, 60, writer and producer of “The Disappointments,” the hit YouTube comedy/drama series about three friends in their 50s, Instagram

“I hired a person over 50. You can’t imagine the resistance I had to overcome. The HR manager was not impressed. She said he ‘won’t fit into our culture,’ ‘he is overqualified.’ etc. I had to put my foot down to get him hired. He was one of the best hires I ever made. He made a huge difference for the company,” – Friba A, HR Manager, LinkedIn (9600+ likes, 640+ comments, 340+ shares.)

Images below are 1440px at 72dpi. Images courtesy of The Tee Service.
DOWNLOAD folder of images on this page including transparent (no background) pngs.
Custom formatted images available on request. Just ask!

Note to the media: I make an effort to present information for you as efficiently as possible. If you are having trouble finding what you need, or wish to offer a suggestion on how I can better serve your needs as a journalist, please don’t hesitate to email me at andy@popularpublicity.com

A plug for my other biz, The Tee Service. Here with a punky NYC T-shirt. In 6 colors. Also comes as a tote (3 versions), a censored version + a super cute Punk Rock Family collection: Punk Rock Mama, Punk Rock Papa, Punk Rock Kid and Punk Rock Baby (including a onesie).
"Dear Queer Self: An Experiment in Memoir" by client author Jonathan Alexander on the LGBTQ table right up front at Stand Bookstore @strandbookstore @acrebooks @profjalexanderart Also at www.strandbooks.com, www.acre-books.com, and www.bgsqd.com, where Jonathan did a reading wtih Pamela Sneed @pamela_sneed last week.
My friend Phil @philmontana62 rocking an #AGEISMSUCKS T-shirt. He's been a great commentator an ageism, especially for men and gay men, which are nearly invisible in the discussion.
Pamela Sneed and Jonathan Alexander at their event "Writing Our Own Queer Histories" last night at Bureau of General Services—Queer Division in New York City. Powerful readings followed by a great discussion and dinner after at The Odeon @theodeonnyc , courtesy of (client) Jonathan Alexander. Video available on the BGSQD YouTube channel.
This lil' logo can also now be seen on in the Partners & Friends section of the www.loyaltyfoundation.org @loyalty_foundation homepage. 😎 I handle their publicity, social media.
Today on Advocate.com: "For his recent book Dear Queer Self: An Experiment in Memoir, queer author and professor Jonathan Alexander took a trip to the past, imagining that he was in conversation with his younger self. The approach, he says, allowed him to better understand who he is today. Southern California-based Alexander spoke with another queer author, Alex Espinoza, who wrote Cruising: An Intimate History of a Radical Pastime, about how he wrote Dear Queer Self and why he believes that maybe it doesn’t really “get better.” Link in bio to the Q&A.
Loading Comments...
%d bloggers like this: